The sandbox deployment is not suitable for production environments. For an in-depth overview of how to productionize your Flyte deployment, checkout the Deployment guide.

What is Flyte Sandbox?#

The follow section explains how you can use each of these modes and provides more information. We recommend running the sandbox using flytectl locally on your workstation or on a single cloud instance to try out Flyte or for testing new ideas. Flyte Sandbox is not a complete representation of Flyte, many features are intentionally removed from this environment to ensure that the startup times and runtime footprints are low.

flytectl sandbox starts a local sandbox environment for Flyte. This is mini-replica of an entire Flyte deployment, without the scalability and with minimal extensions. The idea for this environment originated from the desire of the core team to make it extremely simple for users of Flyte to try out the platform and get a feel for the user experience, without having to understand Kubernetes or dabble with configuration etc. The Flyte single container sandbox is also used by the team to run continuous integration tests and used by the flytesnacks - UserGuide playground environment. The sandbox can be run in most any environment that supports Docker containers and an Ubuntu docker base image.

Architecture and Reasons Why We Built It#

When users call flytectl sandbox start --source <dir>, the source <dir> is mounted within the sandbox container and hence it is possible to build images for that source code, using the inner Docker daemon. In a typical Flyte installation, one needs to build Docker containers for tasks and push them to a repository from which K8s can pull.

This is not possible with the sandbox’s Docker environment however, because it does not ship with a Docker registry. Users are free to use an external registry of course, as long as the inner k3s cluster has permissions to pull from it. To reduce the friction of procuring such a registry, configuring permissions to access it, and having to explicitly push to it, we recommend using the flytectl sandbox exec -- ... mode to trigger a Docker build for your code (which is mounted in the sandbox environment) using the docker-in-docker daemon. Since K3s uses the same Docker daemon, it is possible to re-use the images built internally. This greatly simplifies the user’s interaction and ability to try out Flyte, at the cost of hiding one part of the real-world iteration cycle, calling docker push on your task images.

The illustration below shows the architecture of flyte-sandbox in a single container. It is identical to a Flyte sandbox cluster, except that we have built one docker container, with Kubernetes and Flyte already installed. 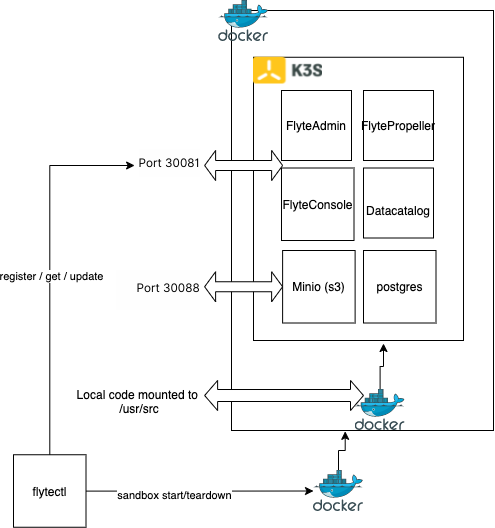 Use the Flyte Sandbox to:#

Deploying your own Flyte Sandbox Environment to a K8s Cluster#

You can deploy the sandbox environment on your laptop workstation to run locally.

Recommended using flytectl sandbox start as described in Getting Started

Ensure you have kubernetes up and running on your choice of cloud provider:

If you can access your cluster with kubectl cluster-info, you’re ready to deploy Flyte.

We’ll proceed like with locally hosted flyte with deploying the sandbox Flyte configuration on your remote cluster.