When & How to Extend Flyte¶

These docs are still work in progress. Please read through and if you have any questions don’t shy away from either filing a github issue or ping us in the Slack channel. The community loves plugins and would love to help you in any way.

The Core of Flyte is a container execution engine, where you can write one or more tasks and string them together to form a data dependency DAG - called a workflow. If your work involves writing simple python or java tasks that can either perform operations on their own or can call out to external services - then there is NO NEED to extend FLYTE.

But, in that case you can almost do everything using python / java or a container - So why should you even have to extend Flyte?

Case 1: I want to use my special Types - e.g. my own DataFrame format¶

Flyte, just like a programming language has a core type-system, but just like most languages, this type system can be extended by allowing users to add User defined Data types. A User defined data type can be something that Flyte does not really understand, but is extremely useful for a users specific needs. For example it can be a custom user structure or a grouping of images in a specific encoding.

Flytekit natively supports handling of structured data like User defined structures like DataClasses using JSON as the representation format. An example of this is available in FlyteCookbook - Using custom objects.

For types that are not simply representable as JSON documents, Flytekit allows users to extends Flyte’s type system and implement these types in Python. The user has to essentially implement a flytekit.extend.TypeTransformer class to enable translation of the type from Users type to flyte understood types. As an example, instead of using pandas.DataFrame directly, you may want to use Pandera to perform validation of an input or output dataframe. an example can be found here.

To extend the type system in flytekit refer to an illustrative example found at - How to write/use your custom types in a task?.

So often times you want to interact with a service like,

and you want this to be available like a template for all other users - open source or within your organization. This can be done by creating a task plugin. A Task-plugin makes it possible for you or other users to use your idea natively within Flyte as this capability was built into the flyte platform.

Thus for example, if you want users to write code simply using the @task decorator, but you want to provide a capability of running the function as a spark job or a sagemaker training job - then you can extend Flyte’s task system - we will refer to this as the plugin and it could be possible to do the following

Interestingly there are 2 options here. You can write a task plugin simply as an extension in flytekit, or you can go deeper and write a Plugin in the Flyte backend itself.

An illustrative example of writing a flytekit plugin can be found at - How to write your own flytekit task plugins?. Flytekit plugins are simple to write and should invariably be the first place you start at. Here

Doc on how to writed a backend plugins is coming soon. A backend plugin essentially makes it possible for users to write extensions for FlytePropeller (Flytes scheduling engine). This enables complete control on the visualization and availability of the plugin.

How do I decide which path to take?¶ 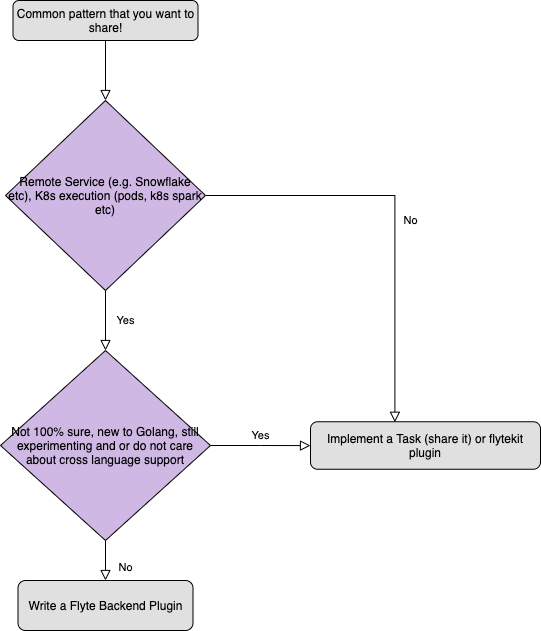