How to Use Flyte UI¶

Flyte UI is a web-based user interface for Flyte. It helps interact with Flyte objects and builds DAGs out of your workflows.

With Flyte UI, you can:

Launch a workflow by clicking on the Launch Workflow button. Workflows are viewable after they are registered. The UI should be accessible at http://localhost:30081/console.

The end-to-end process from writing code to registering workflows is present in the Implement Your Workflows in Python.

A pop-up window appears with input fields that the execution requires on clicking the Launch Workflow button. If the default inputs are given, they will be auto-populated. 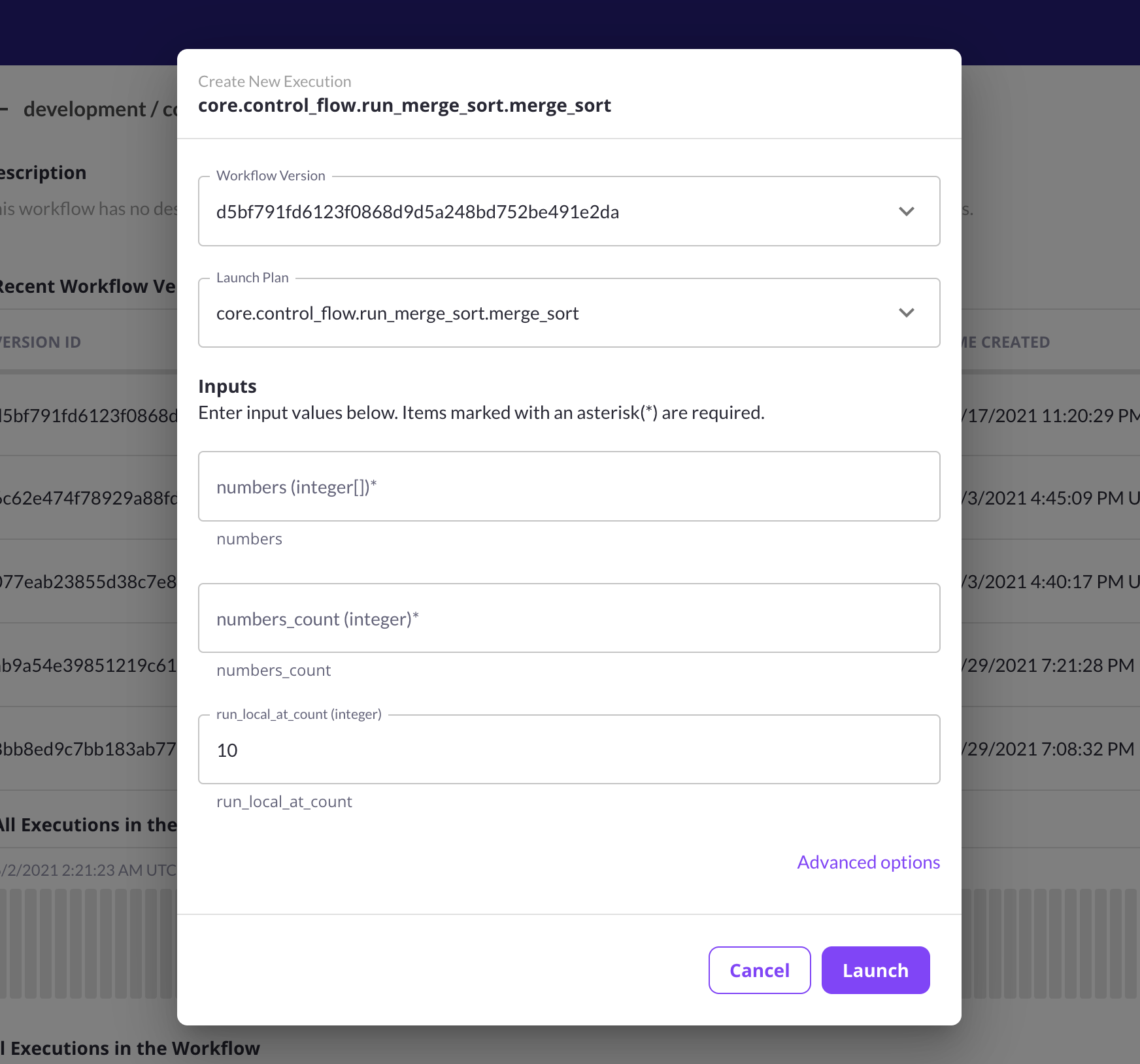 A pop-up window appears after clicking the “Launch Workflow” button.¶

An execution can be terminated/aborted by clicking on the Terminate button.

Terminate an execution by clicking the “Terminate” button.¶

Launch a task by clicking on the Launch Task button. Tasks are viewable after they are registered. The UI should be accessible at http://localhost:30081/console.

Launch a task by clicking the “Launch Task” button.¶

A pop-up window appears with input fields that the task requires and the role with which the task has to run on clicking the Launch Task button. 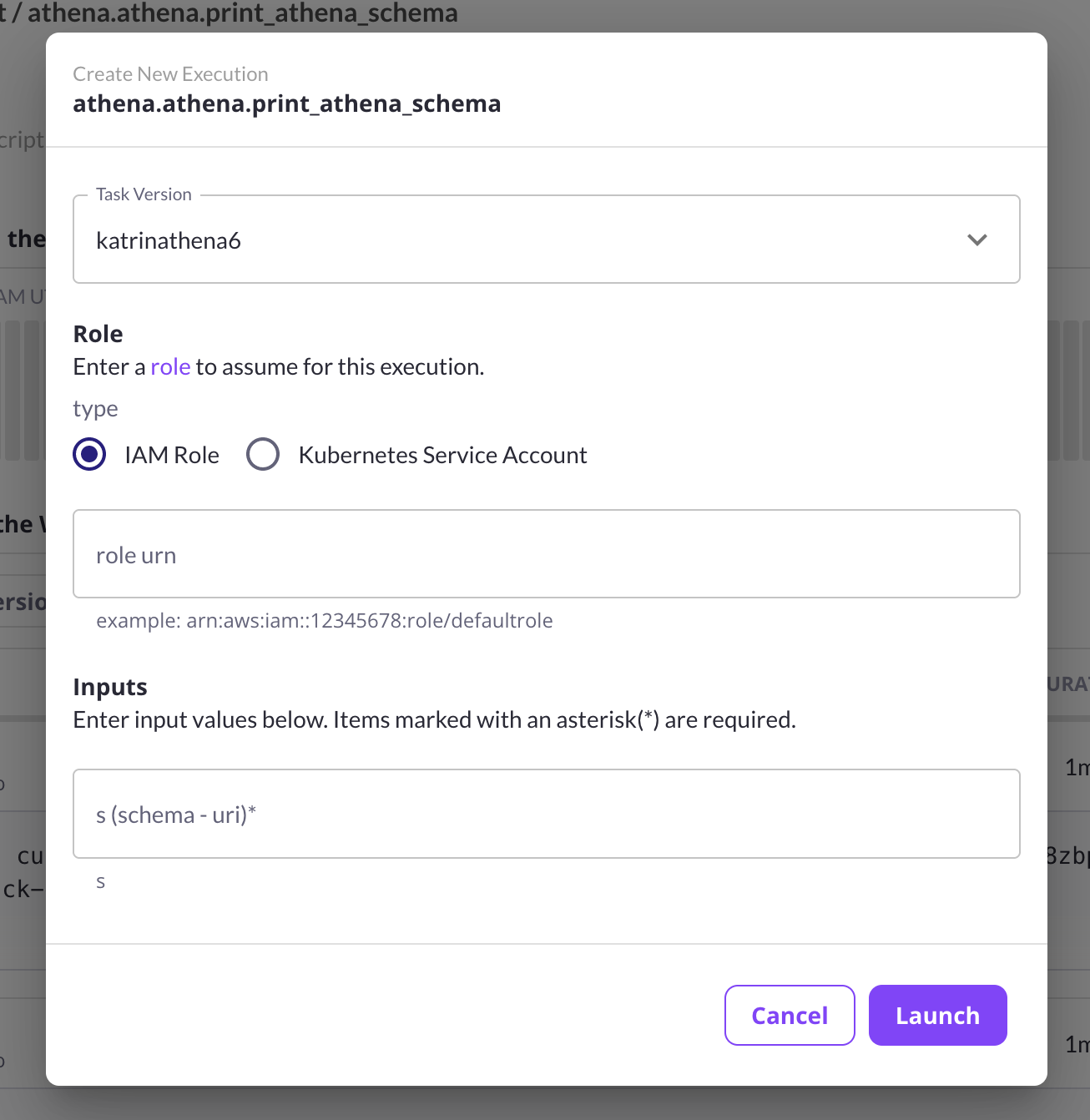 A pop-up window appears on clicking the “Launch Task” button.¶

Every registered Flyte entity is tagged with a version. All the registered versions of workflows and tasks are viewable in the UI. 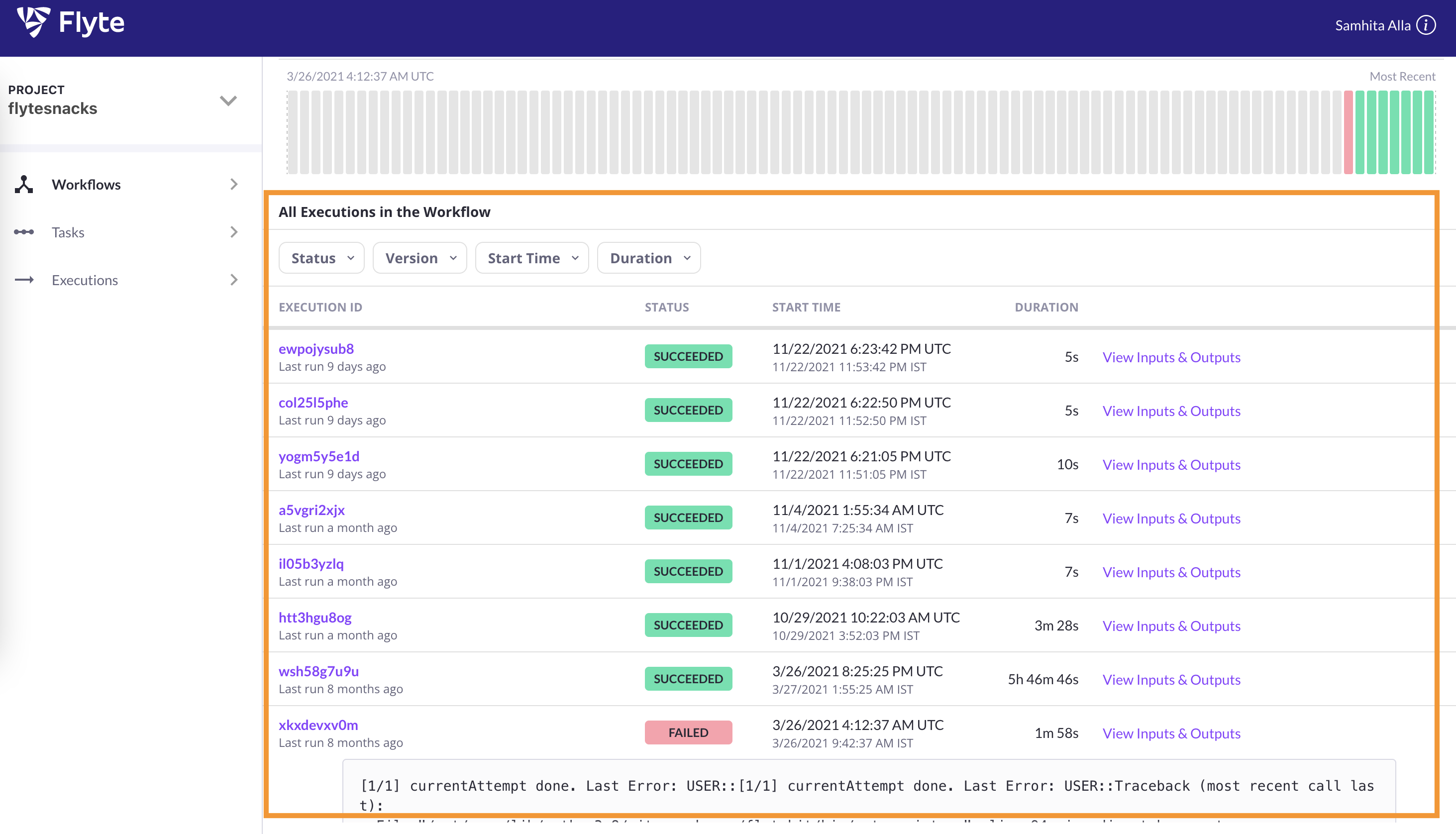 Every registered Flyte entity is versioned and can be triggered anytime. 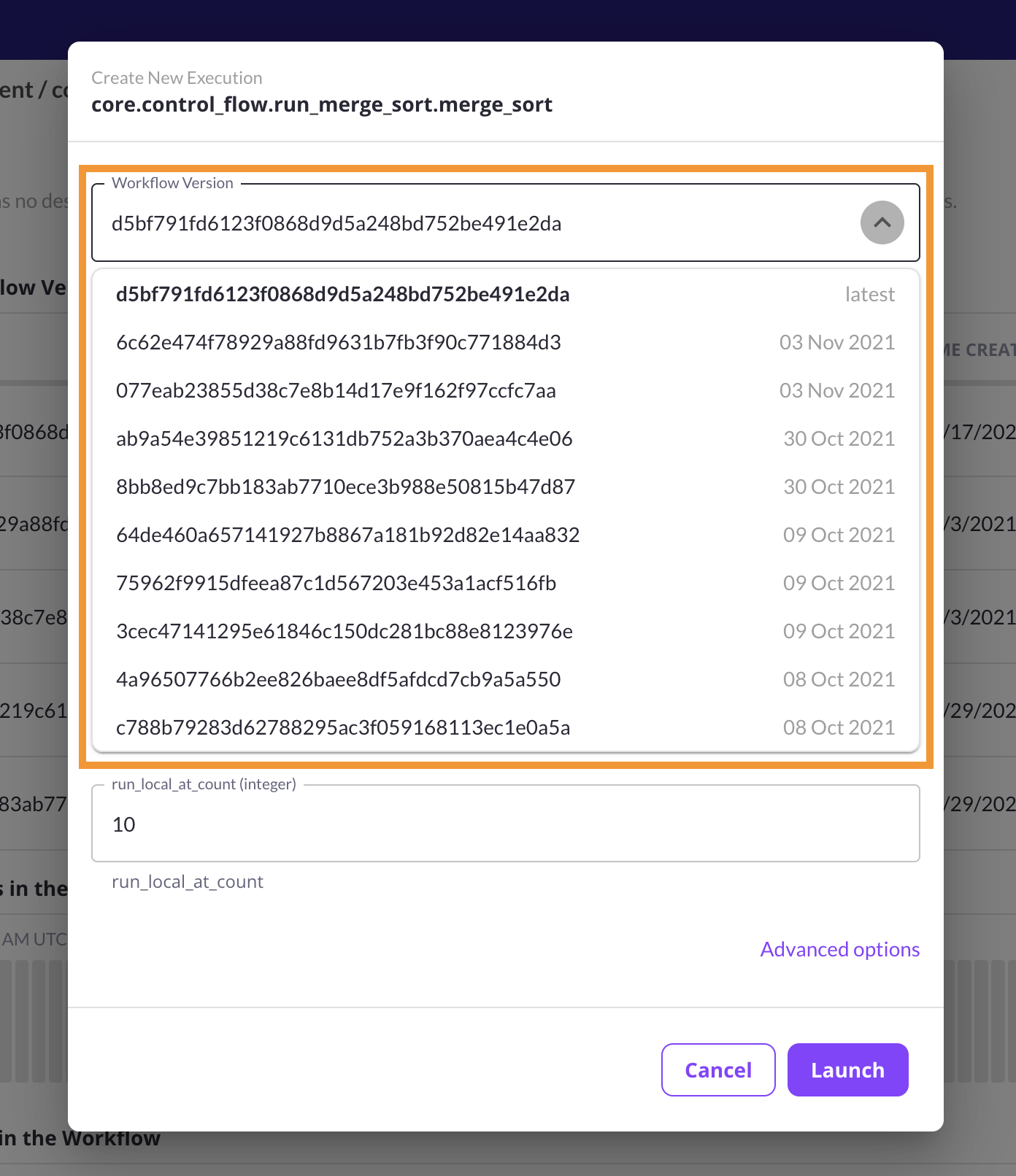 Executions can be inspected through the UI. Inputs and Outputs can be viewed for every node and execution.

Logs are accessible as well.

Every execution has two views: Nodes and Graph.

A node in the nodes view encapsulates an instance of a task, but it can also contain an entire subworkflow or trigger a child workflow. More about nodes can be found in Nodes. 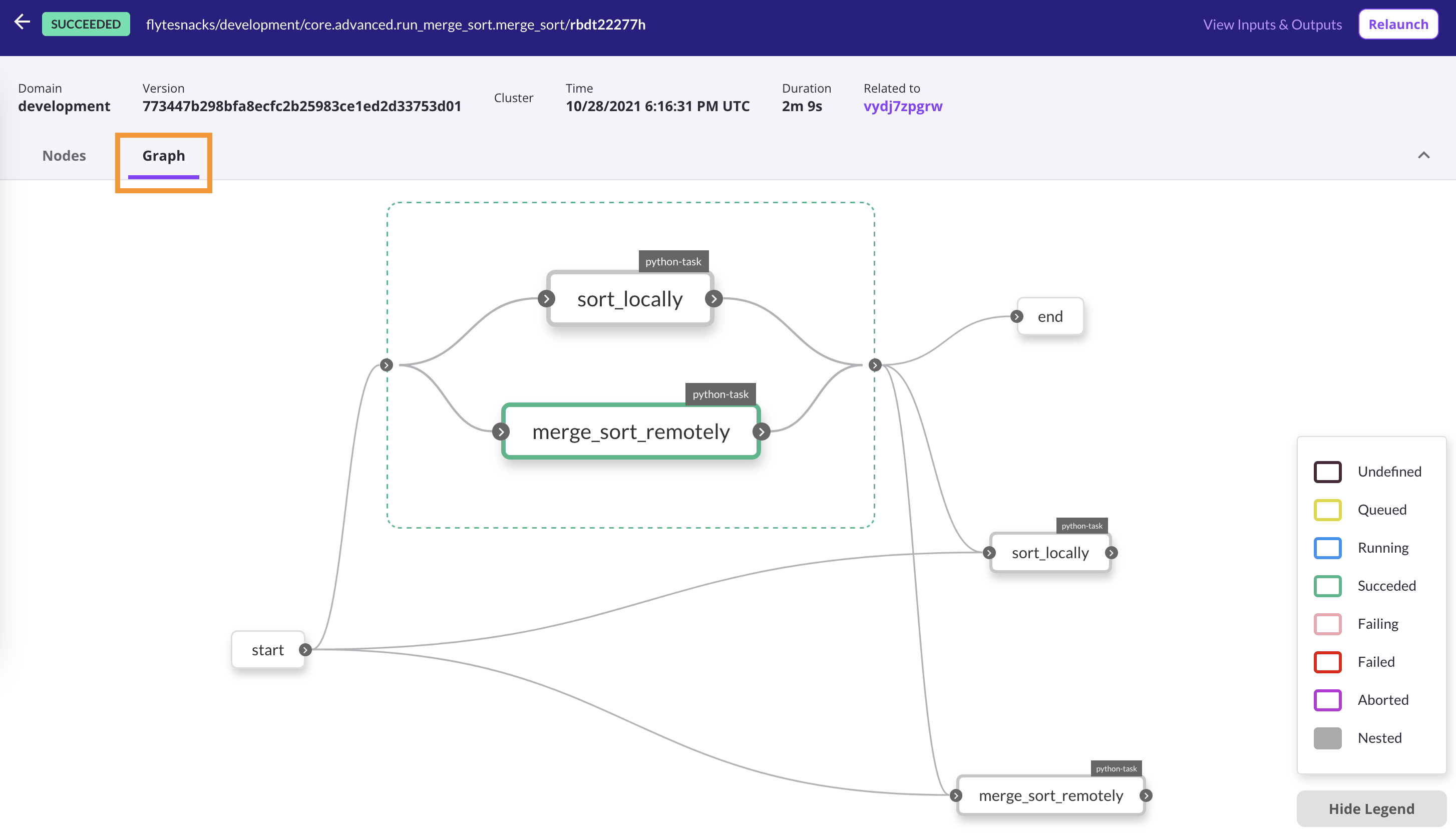 An execution in the RUNNING state can be cloned.

Click on the ellipsis on the top right corner of the UI.

The Relaunch button allows you to relaunch a terminated execution with pre-populated inputs. This option can be helpful to try out a new version of a Flyte entity.

A pop-up window appears on clicking the relaunch button, allowing you to modify the version and inputs.

Recovery mode allows you to recover an individual execution by copying all successful node executions and running from the failed nodes. The Recover button is able to recover a failed execution.