There are two parts to the data in Flyte:

In the above code sample, m, n, o are inputs to the task. m of type int and n of type str are simple primitive types, while o is an arbitrarily sized file. All of them from Flyte’s point of view are data. The difference lies in how Flyte stores and passes each of these data items.

For every task that receives input, Flyte sends an Inputs Metadata object, which contains all the primitive or simple scalar values inlined, but in the case of complex, large objects, they are offloaded and the Metadata simply stores a reference to the object. In our example, m and n are inlined while o and the output pd.DataFrame are offloaded to an object store, and their reference is captured in the metadata.

Flytekit TypeTransformers make it possible to use complex objects as if they are available locally - just like persistent filehandles. But Flyte backend only deals with the references.

Thus, primitive data types and references to large objects fall under Metadata - Meta input or Meta output, and the actual large object is known as Raw data. A unique property of this separation is that all meta values are read by FlytePropeller engine and available on the FlyteConsole or CLI from the control plane. Raw data is not read by any of the Flyte components and hence it is possible to store it in a completely separate blob storage or alternate stores, which can’t be accessed by Flyte control plane components but can be accessed by users’s container/tasks.

Every task can read/write its own data files. If FlyteFile or any natively supported type like pandas.DataFrame is used, Flyte will automatically offload and download data from the configured object-store paths. These paths are completely customizable per LaunchPlan or Execution.

Metadata in Flyte is critical to enable the passing of data between tasks. It allows to perform in-memory computations for branches or send partial outputs from one task to another or compose outputs from multiple tasks into one input to be sent to a task.

When a task is declared with inputs and outputs, Flyte extracts the interface of the task and converts it to an internal representation called a TypedInterface. For each variable, a corresponding LiteralType is created.

For example, the following Python function’s interface is transformed as follows:

At runtime, data passes through Flyte using Literal where the values are set. For files, the corresponding Literal is called LiteralBlob (Blob) which is a binary large object. Many different objects can be mapped to the underlying Blob or Struct types. For example, an image is a Blob, a pandas.DataFrame is a Blob of type parquet, etc.

One implementation of Flyte is the current workflow engine.

The workflow engine is responsible for moving data from a previous task to the next task. As explained previously, Flyte only deals with Metadata and not the actual Raw data. The illustration below explains how data flows from engine to the task and how that is transferred between tasks. The medium to transfer the data can change, and will change in the future. We could use fast metadata stores to speed up data movement or exploit locality. 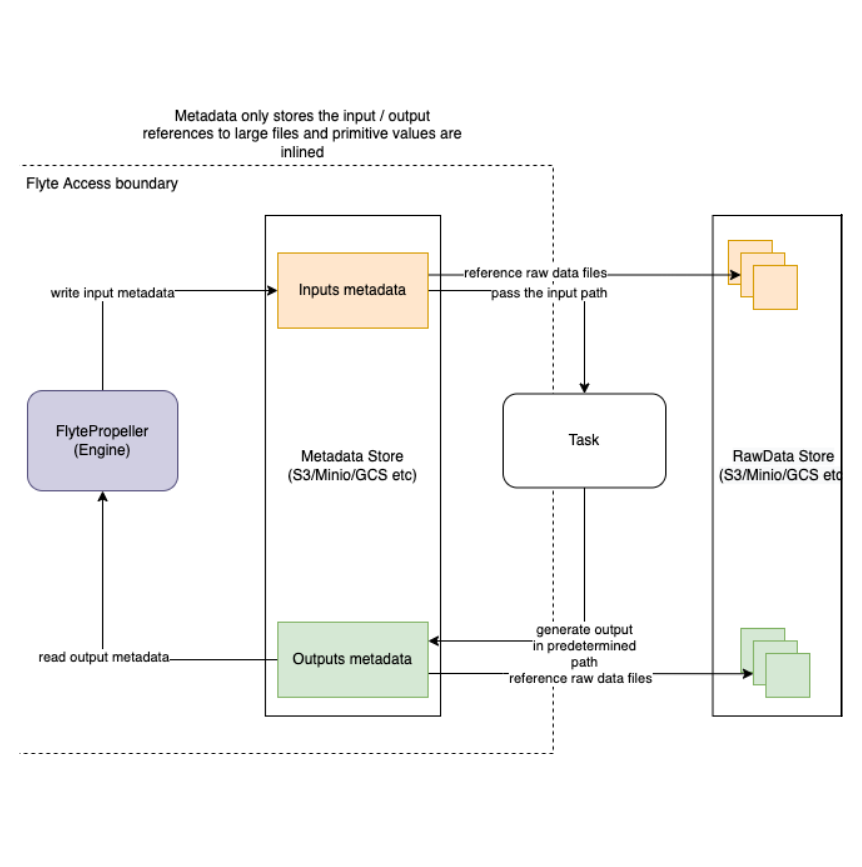 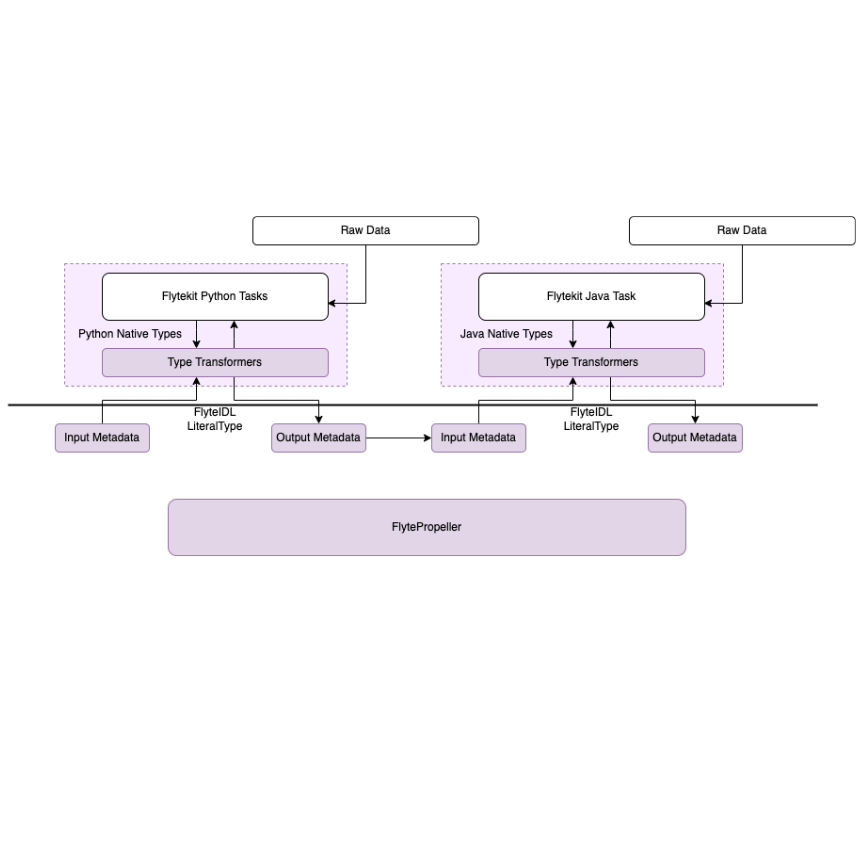 Bringing in Your Own Datastores for Raw Data#

Flytekit has a pluggable data persistence layer. This is driven by PROTOCOL. For example, it is theoretically possible to use S3 s3:// for metadata and GCS gcs:// for raw data. It is also possible to create your own protocol my_fs://, to change how data is stored and accessed. But for Metadata, the data should be accessible to Flyte control plane.

Data persistence is also pluggable. By default, it supports all major blob stores and uses an interface defined in Flytestdlib.