In the frame of this document, we use the term “workflow” to describe the single execution of a workflow definition.

A Flyte workflow is represented as a Directed Acyclic Graph (DAG) of interconnected Nodes. Flyte supports a robust collection of Node types to ensure diverse functionality. - TaskNodes support a plugin system to externally add system integrations. - Control flow can be altered during runtime using BranchNodes, which prune downstream evaluation paths based on input. - DynamicNodes add nodes to the DAG. - WorkflowNodes allow embedding workflows within each other.

FlytePropeller is responsible for scheduling and tracking execution of Flyte workflows. It is implemented using a K8s controller and adheres to the established K8s design principles. In this scheme, resources are periodically evaluated and the goal is to transition from the observed state to a requested state.

In our case, workflows are the resources and they are iteratively evaluated to transition from the current state to success. During each loop, the current workflow state is established as the phase of workflow nodes and subsequent tasks, and FlytePropeller performs operations to transition this state to success. The operations may include scheduling (or rescheduling) node executions, evaluating dynamic or branch nodes, etc. These design decisions ensure that FlytePropeller can scale to manage a large number of concurrent workflows without performance degradation. 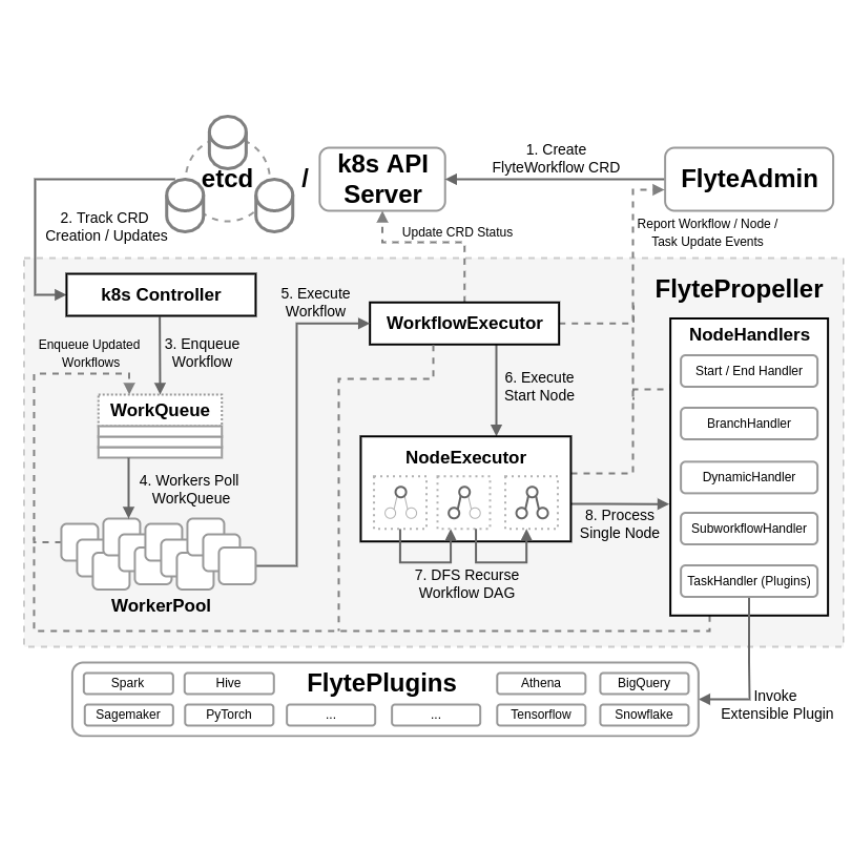 Workflows in Flyte are maintained as Custom Resource Definitions (CRDs) in Kubernetes, which are stored in the backing etcd cluster. Each execution of a workflow definition results in the creation of a new FlyteWorkflow CR (Custom Resource) which maintains a state for the entirety of processing. CRDs provide variable definitions to describe both resource specifications (spec) and status’ (status). The FlyteWorkflow CRD uses the spec subsection to detail the workflow DAG, embodying node dependencies, etc. The status subsection tracks workflow metadata including overall workflow status, node/task phases, status/phase transition timestamps, etc.

K8s exposes a powerful controller/operator API that enables entities to track creation/updates over a specific resource type. FlytePropeller uses this API to track FlyteWorkflows, meaning every time an instance of the FlyteWorkflow CR is created/updated, the FlytePropeller instance is notified. FlyteAdmin is the common entry point, where initialization of FlyteWorkflow CRs may be triggered by user workflow definition executions, automatic relaunches, or periodically scheduled workflow definition executions. However, it is conceivable to manually create FlyteWorkflow CRs, but this will have limited visibility and usability.

The WorkQueue is a FIFO queue storing workflow ID strings that require a lookup to retrieve the FlyteWorkflow CR to ensure up-to-date status. A workflow may be added to the queue in a variety of circumstances:

The WorkerPool is implemented as a collection of goroutines, one for each worker. Using this lightweight construct, FlytePropeller can scale to 1000s of workers on a single CPU. Workers continually poll the WorkQueue for workflows. On success, the workflow is executed (passed to WorkflowExecutor).

The WorkflowExecutor is responsible for handling high-level workflow operations. This includes maintaining the workflow phase (for example: running, failing, succeeded, etc.) according to the underlying node phases and administering pending cleanup operations. For example, aborting existing node evaluations during workflow failures or removing FlyteWorkflow CRD finalizers on completion to ensure the CR is deleted. Additionally, at the conclusion of each evaluation round, the WorkflowExecutor updates the FlyteWorkflow CR with updated metadata fields to track the status between evaluation iterations.

The NodeExecutor is executed on a single node, beginning with the workflow’s start node. It traverses the workflow using a visitor pattern with a modified depth-first search (DFS), evaluating each node along the path. A few examples of node evaluation based on phase: successful nodes are skipped, unevaluated nodes are queued for processing, and failed nodes may be reattempted up to a configurable threshold. There are many configurable parameters to tune evaluation criteria including max parallelism which restricts the number of nodes which may be scheduled concurrently. Additionally, nodes may be retried to ensure recoverability on failure.

The NodeExecutor is also responsible for linking data readers/writers to facilitate data transfer between node executions. The data transfer process occurs automatically within Flyte, using efficient K8s events rather than a polling listener pattern which incurs more overhead. Relatively small amounts of data may be passed between nodes inline, but it is more common to pass data URLs to backing storage. A component of this is writing to and checking the data cache, which facilitates the reuse of previously completed evaluations.

FlytePropeller includes a robust collection of NodeHandlers to support diverse evaluation of the workflow DAG:

It should be noted that the WorkflowExecutor, NodeExecutor, and TaskHandlers send events to FlyteAdmin, enabling it to track workflows in near real-time.